The GST is completely replacing of existing Indirect tax system. So that our Dynamics NAV ERP has to modify as per new Indirect Tax System.

Microsoft had provided the patch for SBC & KKC after it was announced by Government.

Let hops that we will get the GST patch before 1st April 2017 by Microsoft.
Patch will be available for following Dynamics NAV IN version:
NAV 2009 R2 and prior version support close by Microsoft so that GST patch will not release for it.
Partner has to developed it by self or they have 6 months time to upgrade to new version.

Document reports need to modified by developer to show the GST Tax on layout and it is very time consuming task to modified all existing customer reports at a time.

I wish GST will implement in Dynamics NAV successfully without any trouble for customer and partner.

I will update this blog when i will get any tentative release date for GST Patch for Dynamics NAV IN.

GST is a consumption based tax levied on sale, manufacture and consumption on goods & services at a national level. This tax will be substitute for all indirect tax levied by state and central government. Exports and direct tax like income tax, corporate tax and capital gain tax will not be affected by GST. GST would apply to all goods other than crude petroleum, motor spirit, diesel, aviation turbine fuel and natural gas. It would apply to all services barring a few to be specified. With the increase of international trade in services, GST has become a global standard.
The proposed tax system will take the form of “dual GST” which is concurrently levied by central and state government. This will comprise of:
Many taxes has been subsumed under GST which are as under

State Indirect Taxes & Levies
Who will pocket taxes?
For Intra State Transactions: In case of Intra State transactions, Seller collects both CGST & SGST the buyer and CGST needs to be deposited with Central Govt. and SGST with State Govt.
For Inter State Transactions: Integrated Goods and Service Tax (IGST) shall be levied on Inter State transactions of goods and services which are based on destination principle. Tax gets transferred to Importing state. More over it is proposed to levy an additional tax on supply of goods, not exceeding one percent, in the course of inter-state trade or commerce, to be collected by the Central Govt. for a period of two years, and assign to the States where the supply originates. Valuation of stock transfers to be determined. Exports and Supplies to SEZ units will be zero rated.


How to adjust the Credit?
Setoff of IGST, CGST & SGST will be as follows in the below mentioned chronological order only.

What impact GST will have on pricing of products as compared to current scenario?

Let us take an EXAMPLE to understand this clearly. 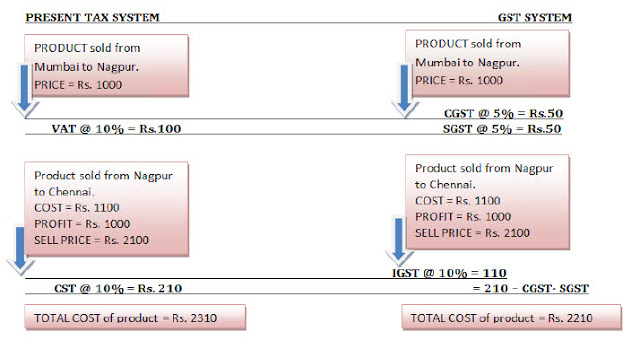 NSDL has been appointed to incubate the GST Portal and develop its functionality. NSDL has created a pilot portal known as “GST Pilot Portal”
Here, every tax payer will be issued a 15 digit common identification number which will be called as “Goods & Service Tax Identification Number” (GSTIN) a PAN based number.
Online application form for dealers will be available to provide their details and upload documents.
Registration includes basic steps like register themselves on the Enrolment page, and then Login using the given “User ID” and “password”, filling the application form by uploading the requisite documents related to excise, Service Tax, IEC, CIN, Professional Tax number, Shops & Establishment Number and any other state specific registration numbers, contact numbers, postal address & E-mail address of business entity, bank account details including MICR code, place of business, details of goods & services, scanned signed photographs.


Like, every coin has two sides, even this concept of GST has its own positives and negatives,

Please write your comment if you have any query.
Posted by Nilesh Gajjar at 10:07:00 AM

Email ThisBlogThis!Share to TwitterShare to FacebookShare to Pinterest
Labels: GST